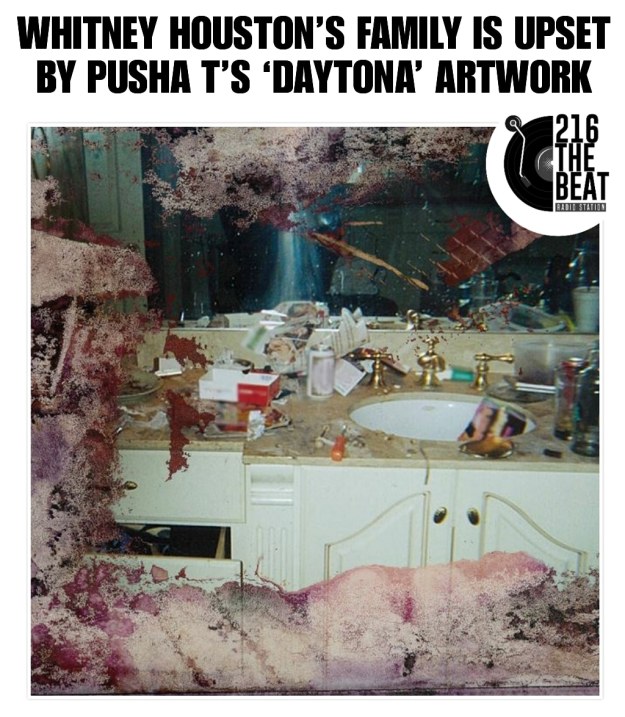 #PushaT’s #Daytona has been a hot topic in Hip-Hop since its release on Friday. With conversations ranging from immaculate flows to #Drake disses, the G.O.O.D. Music emcee has harnassed the conversation, however, the most controversial may be his album artwork.

For those catching up on the news, #Kanye West purchased the photo of #WhitneyHouston’s hotel bathroom for $85,000 as a last minute cover switch. The immediate family of the late singer has shared they are hurt by the decision, which shows the counter covered in drug paraphernalia and drug covered spoons.

According to People, Damion Elliot, cousin of Houston, was alerted about the artwork from his daughter who was upset at its use. “She sent me this picture from the album cover and I immediately got sick to my stomach because it took me right back to six years ago,” says Elliot.

Elliot also spoke on Kanye’s current “train wreck” but stated that he did not believe the actions of Kanye would go beyond his own issues to harm someone else’s family.

“To do something for a publicity stunt to sell records, it’s absolutely disgusting,” Eliott shared. “It hurt my family and my daughter. It’s petty. It’s tacky.”

Elliott also shared that while he has not heard from Whitney’s mother in regards to the photo, he did attempt to warn his own, Dionne Warwick. Elliott and the family want an apology from Kanye and a switch of album art. But after an $85,000 price tag that may be a distant request.
➖➖➖➖➖➖➖➖➖➖➖➖➖➖➖
Via: #TheSource

Offset shared the video to “Violation Freestyle” which proves that Culture 2 is in the works, per Complex

King Content, who previously did the Migos “Get Right Witcha” video, is the key director for this one also!

According to Complex, as of Monday, Culture 2 sessions had wrapped up and tracks have been forwarded for mixing. No mention of the track list yet, but we can assume that “Motorsport” featuring Nicki Minaj & Cardi B, and the new club single produced by Pharrell “Stir Fry” will be included on the album.

As for who will be producing the album we will have to wait patiently for that until then Quavo did deny rumors of Kanye West being a guest producer. Well, I am so proud of the Migos, they also are nominated for “Best Rap Album of The Year” catagory for the 2018 60th Grammy awards which will airing live on January 28th at 7:30pm eastern. I also had the pleasure of interviewing hot producer Cash Clay Beats in December regarding being Grammy nominated for his contribution to the album on the single “Kelly Price“.

Make sure to keep up with the station blog to watch out for Culture 2 updates!!!

When you’re a producer who can rap…

We don’t know who Mic is spitting at but THEY know! Mic aka The Producer Mic is back with a vengeance and no one is gonna steal his shine this time around. He brings heat with his freestyle on “FIVE THIRTY ONE”

Check out the track below:

HIT OR MISS SUNDAYS, TUNE IN!

#BlackoutTuesday Standing in solidarity!
If you have profited off of our Cukture in ANY shape form or fashion, YOU should be outraged. YOU shouldn't be silent. Silence speaks louder than you think.
Exactly what we needed right now!!! #Verzuz #VerzuzTV
BLACKOUT DAY JULY 7, 2020. This is a call to action!! We need one day of solidarity in America when not one black person in America spends a dollar. This includes Africans, Native Americans, Asian-Americans, Hispanics...ALL people of color. Together we have 3.9 trillion dollars in economic spending power. That’s $10,684,931,506.80 it’s going to cost per day next time a person of color gets shot!!! We will call it #BLACKOUTDAY2020 July 7th, 2020 please spread the message, and let’s show REAL action that they fear!!!! PLEASE understand that this first goal of organizing a #BLACKOUTDAY on July 7th, 2020 is only the beginning of a lifelong pursuit of economic empowerment as a reality for ALL BLACK PEOPLE. United, we are an unstoppable force. We are a nation of people within this nation that at any time can demand our liberation by withholding our dollars. If we can do it for a day, we can do it for a week, a month, a quarter, a year...and one day we will look up and it will be a way of life. #CallToAction #SpreadTheWord #BlackPower #BlackWealth #BlackDollar #BlackUnity SHARE SHARE SHARE PLEASE